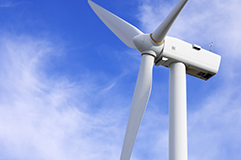 The unique characteristics, operating parameters, and environmental exposure of wind turbines dictate that related parts and components exhibit remarkable strength and endurance while also being lightweight. Epoxies meet all of these challenges.

A hundred years ago, windmills covering Texas pumped water from aquifers to irrigate gardens and provide drinking water for cattle. Today, the oil and gas state leads the U.S. in wind generated electrical power. Of alternative energies pursued today, wind power historically pre-dates all of them. The same aerodynamic lift that gives flight to aircraft was understood by ancient sailors—even though they didn’t know the physics behind it. Long ago, sails were also used to form the propellers for early windmills. Early windmills weren’t used to generate power; rather, they served as one of the first forms of industrial automation. Even the name “windmill” is derived from yesterday’s function as a wind-powered grain mill which— when compared to human labor—saved considerable time and effort while increasing production.   Development continued and, especially in the 19th century, advancements were made to make better and more efficient, power generating windmills—until electrical grids were extended to farms, which often negated the need for windmills. By the 1950s in the U.S., wind power died—or, at least fell into a deep sleep. Thankfully, early wind turbine successes—going back to the U.S. Midwest— set the stage for today’s wind technology as a viable, renewable form of power generation. Fast forward to 2007. It was then estimated that global wind energy capacity grew by about 20 gigawatts. In the first quarter of 2011, total installed wind power capacity in the U.S. was rated at 41,400 MW, puttin the U.S. second only to China. In America, 37 states have installed utility scale wind turbines, while 14 states have installed 1,000 MW of wind power capacity. Texas currently bests the rest of the nation with 10,085 MW of wind power capacity.   How much is under construction? Over 5,600 MW worth of projects are currently being built. Also consider that land based installations aren’t the only option. Offshore projects exploit more and stronger winds to power nearby cities. Long-term technical potential of wind energy in the U.S. is believed by some to be 16X greater than we currently use. Globally, wind power potential is up to 40X greater than current power consumption.

Today’s wind turbines vary widely in size and output, from 1 to 200 kW models that help offset electricity bills in homes and small businesses, to mammoth turbines—tied into major power grids—producing 3 to 8 MW output. As a size reference, consider that a single blade (of 3-blade set) for a 3 MW turbine measures about 155 feet in length and weighs about 27,000 pounds. Made primarily of high-tech composites around balsa or foam cores, that single blade is valued at up to $300,000.   Generally, most wind turbines consist of three components, including a rotor (with blades), a generator (with electrical generator, control electronics, and gearboxes and/or transmissions), and structural support (tower and rotor yaw mechanism). Note that most components and systems (generator, drive train, and brake assembly) are built into the wind turbine’s main body, or nacelle.

Epoxy Applications in Wind Power Compared to other adhesives, epoxies are usually stronger and more durable, making them suitable for structural uses. They offer high mechanical strength properties, superior dimensional stability, and excellent adhesion to similar and dissimilar substrates. Also offering better chemical and temperature resistance, epoxies usually exhibit a very wide working temperature range.   Wind turbine blade assemblies are made of many bonded and some fastened elements, and must also accommodate pieces including rain deflectors, flaps, and other aerodynamic and environmental assists. Epoxies can be very successfully employed for bonding, void filling, metal insert attachment, thread locking, and joining of external items.   Structural elements such as stringers are often added to improve the strength and dimensional stability of the nacelle. Mechanical fastening in such applications is problematic. Drilled holes can become weak points, and have to be sealed from the elements. Fasteners driven into the nacelle itself can later cause stress cracking. In nut-and-bolt-style arrangements, assembly efforts are considerable since two-sided access is often troublesome if not impossible. Epoxies eliminate those problems since the nacelle needn’t be drilled, which also eliminates sealing concerns. Epoxy cure times can be varied so that stringers can be attached easily and permanently. Environmental and temperature extremes cause problematic expansion and contraction; special grades of epoxies will generally expand and contract with the substrate, so stress cracking and delamination are eliminated. Should a repair be required later on, epoxies are easy to use, set quickly, and can be applied with single sided access.   All of the elements within a turbine’s nacelle—from generators to gearboxes and even hatches and steps— require strong mounts. Epoxies can serve as an ideal solution to affix such mounts completely and effectively to the nacelle, with no maintenance required. Also, some of those elements like hatches require cutouts in the nacelle that need to be sealed. Epoxy is an ideal solution for mounting weather-resistant moldings and sealing strips.   In contrast to industrial machinery in which bearings are firmly mounted or pressed into machined metal housings, bearings in various nacelle applications are sometimes mounted in composite components. While composites are generally very strong, it’s often a challenge to achieve a tight, long lasting, dimensionally stable fit between a bearing and a composite structure. Epoxies can be very effectively used to retain and stabilize bearings in such situations, over a wide range of operating speeds and temperatures.   While metal fasteners are avoided as much as possible in wind turbine construction—due to weight and the aforementioned problems—their use can’t be completely eliminated. Keep in mind that service and maintenance in a ground level industrial facility start with the simple act of walking across the plant to access equipment. Service and maintenance of a wind turbine, on the other hand, begin with a lengthy, expensive, 100 or 200 foot ascent into the nacelle. So, drastically minimizing required service and maintenance is key. As part of that, epoxies can be used during initial construction—and later, when a serviced component is reattached—to keep fasteners consistently tightened to spec and protected over the long run. Staying on the maintenance side of things, epoxies also make for strong, long lasting, and workable bonds in blade repair, pipe and flange sealing, and electrical/electronic protection and insulation.   Epoxies can also be used for common tasks such as attaching nameplates, inhibiting corrosion, potting electronic controls, and coating electrical connections for both strength and environmental resistance.   Conclusion Industrial machinery exhibits a wide range of vibrations despite being fastened to a concrete plant floor. Large wind turbines are enormous devices incorporating massive pieces of equipment that don’t have the benefits of that stable, concrete floor. In a wind turbine, vibrations are not only amplified but can cause a ripple effect: one vibrating component triggering instability in—or increasing wear and vibration of—another component. Environmental considerations are much more serious when it comes to a wind turbine. The considerable forces of Mother Nature are harnessed by a wind turbine—and those same forces cause vibrations and movement in a whole new, less stable world of mechanical dynamics.   The upshot? A wind turbine isn’t an easy place to be— especially for parts, components, rotating equipment, electrical systems, and electronic controls. Epoxies won’t make that environment a better place, but they will protect, fasten, seal, lock, coat, mount, and element-proof an exceptionally wide range of components and assemblies that must endure extreme conditions. Contact the experts at Master Bond to specify the best epoxy for the multitude of applications within the wind power industry.