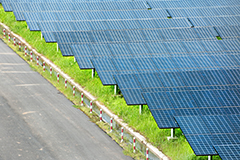 Compared to the environment of the plant floor, solar equipment must endure brutal heat and UV, crippling cold driving rains and other intense conditions. In solar applications, epoxies meet those and other unique challenges.

We often think of solar as some new form of gee-whiz technology. In fact, humans have been harnessing the power of the sun since the 7th century B.C., starting off with ways to concentrate the sun’s energy to light fires. Think solar water heaters are new? A Baltimore inventor patented the first commercial solar water heater—a tank in a wooden box—in 1891.   In the very early days of solar, cell efficiency— that is, the amount of the sun’s energy that’s actually converted to electricity—was only at 4%. Efficiencies have been rising slowly but steadily ever since. A world record of 16.7% was achieved in 2001, while a test cell using cadmium telluride just recently broke that record at 17.3%. Cadmium telluride panels are important, since they’re cheaper to produce. The more popular form of solar panels today, using crystalline silicone, are rated for efficiencies in varying percentages from high teens to low 20s. Despite numerous discoveries and advances over a very long period of time, solar power was largely a cottage industry that didn’t gain traction until the past couple of decades. Interest spiked around the time of the oil did solar energy’s power-to-weight ratio exceed that of any other workable power generation technology.   In the early 1970s, solar energy harvesting via photovoltaic cells worked out to a prohibitive cost of approximately $100 per watt. Advances since then have slashed that number to only $1 per watt in terms of production costs, with wholesale pricing at about $2 per watt. Welcome to the brave, new world of photovoltaic power.

Solar cells incorporate silicon and are generally made using the same equipment employed to manufacture siliconbased electronics. As chip making technology and related equipment advance, previous generation equipment from the electronics market is often purchased and repurposed to manufacture solar cells. Cells are electrically connected and encapsulated to form a photovoltaic module. Sheets of glass allow light to pass while protecting the semiconductor wafers from nature’s outdoor elements. Modules are then connected to each other creating a solar panel, or array.   Creating a solid and durable framework for cells and modules—as well as interconnecting them— usually requires considerable mechanical engineering: frames, rails, junctions, and a host of other parts and components.

Winning the War Against the Environment

Yes, you read that right. The same solar panels that can ultimately help our environment struggle daily with that environment. Solar panels and related components are exposed to the relentless extremes of Mother Nature throughout their working lives. Solar equipment must endure the great outdoors all day and all night, while reliably withstanding storms, high winds, rain, snow, hail, and other punishing elements. Indoor factory-floor components have relatively easy lives by comparison.   The engineer’s battle is to harness the sun’s energy while also winning the war against component degradation. Individual cells generally aren’t problematic. Once cells are formed into modules and modules are configured into panels, however, heat again becomes a big problem—as do the considerable effects of UV exposure.   Mechanical fasteners by nature absorb, concentrate, and radiate heat. Those characteristics make for higher heat loads, and more quickly lead to the deterioration and eventual failure of related parts and components. Mechanical attachment and fastening methods inherently include a variety of downsides. Each screw or rivet requires a drilled and/or threaded hole. Drilling, threading, fastener insertion and attachment, proper tightening, and thread locking can combine to become an expensive, labor intensive, and complicated process— especially in a high- production environment. Every drilled hole adds a potential point of failure in the form of stress cracking, for instance. If not performed precisely, drilling can also result in chipped, weakened, or damaged substrates.   Solar panels are typically mounted in a stationary fashion—in environments with little or no vibration to worry about—such as on homes or commercial buildings. Increasingly, however, smaller solar panels have gone mobile and are attached to a wide variety of products such as vehicles and even backpacks. In those circumstances, movement and vibration become engineering factors, causing higher stresses on parts and components. Depending on the application, mechanical attachment methods just might not be up to the task of holding things together durably, reliably, and over long periods of time.

Epoxy is a thermosetting polymer. With two-part epoxies, the epoxide resin of one part reacts when mixed with the polyamine hardener of the other. Newer, one-part epoxy systems are precatalyzed and cure with heat. Epoxy technology has come a long way, advancing at a much faster pace than solar technology. Epoxies offer high mechanical strength properties, superior dimensional stability and excellent adhesion to similar and dissimilar substrates. Also offering impressive chemical and temperature resistance, epoxies usually exhibit a very wide temperature range—often, from cryogenic to hundreds of degrees F. Selection of the proper compound depends on the specific application requirements and the most convenient processing techniques.   Engineers should no longer worry about epoxies losing adhesion, aging rapidly, and becoming brittle in the sun. Epoxies have advanced such that they’re not only an alternative to mechanical attachment methods in solar arrays, but a better choice for stronger, more durable, and lasting solar applications. Epoxies are much easier to apply, less labor intensive, and evenly distribute and dissipate heat instead of concentrating it. Not only do those factors lead to structurally stronger, longer lasting, and more reliable panels, but also less expensive panel production.   Some solar panel applications use bonded pads instead of rails or clamps, which can reduce mounting costs. In such uses, epoxies are less expensive to purchase and apply. Of the many considerations in solar panel design and construction, also keep in mind that—in some designs—a single component that shifts because of a stressed or broken attachment may also cause failure of related, tightly bonded elements. Epoxies tend to expand and contract in concert with substrates, instead of resisting such movement. This reduces the possibility of, for example, breakage of glass and/or glass modules, or fracturing of attachment points. Epoxies can also serve as a sealing agent, independent of or in conjunction with the attachment function. Combining two functions with epoxies—sealing and mounting—results in better environmental tolerance as well as greater efficiencies, such as faster production and less expensive application of the material. Most any situation involving a primary component or assembly—in this case, a solar panel—also involves related parts of a system. With this in mind, designers should also consider epoxies for such ancillary items as junction boxes (potting, for instance), conduits (sealing), and electrical connections (fail-safe attachment).   Other solar applications for epoxies include such areas as ingot and cell bonding, housing assembly, lens sealing and bonding, metal tab bonding, and preliminary component positioning during assembly. Also remember that different epoxies can be specified for uses ranging widely from flexible to rigid, conductive or non-conductive.

Most elements of solar applications involve boxes, from cells themselves to modules, then panels. Think outside of those boxes when you’re designing, planning and specifying elements of assembly, bonding, sealing, potting, and connection. Thoughtful analysis will likely lead to epoxies, resulting in stronger designs, more efficient assembly, reduced costs, longer service life and— ultimately—greater customer satisfaction. Specifying the best epoxy for the right task is a science unto itself. Always be sure to consult with a Master Bond technical expert.