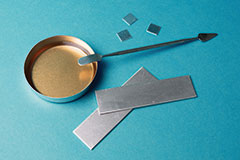 Master Bond epoxies exhibit outstanding physical strength properties for high performance bonding, sealing, coating, potting and encapsulation. There are several key strength properties that may be incorporated in our epoxy adhesive formulations: cleavage, compressive, flexural, peel, tensile, and shear. In this article we will focus on lap shear strength, and how it is tested and measured.

Lap shear strength testing measures the ability of a material to withstand stresses set in a plane, where the exerted shear force is moving the two substrates in opposite directions. It is one of the most common stresses that a bonded joint can face during service, especially in structural bonding applications. The lap shear strength of an adhesive serves as one of the indicators for its long term sustenance in an application.

Evaluation for this property is based on the ASTM D1002 test procedure and is typically performed for an aluminum to aluminum bond joint. The substrates are usually roughened, cleaned, and dried prior to the application of the adhesive. The parts with the adhesive between them are clamped or fixtured during the curing process. Once the adhesive is fully cured, the substrates would be pulled in opposite directions (in shear) until the substrates separate. The force needed to pull the substrates apart is then used to determine the lap shear strength.

In addition to aluminum, other common substrates can be used in various applications. These include polycarbonate, acrylic, PEEK, fiberglass reinforced plastic, Ultem (polyetherimide), polyester, and ABS to name a few. In determining the lap shear strength for such substrates, the plastics would be prepared prior to testing by an effective method such as degreasing, abrasion, physical methods, chemical treatments, or even plasma/corona etching. It is important to note that proper surface preparation plays a pivotal role in achieving the highest possible bond strength.

Although the ASTM D10002 testing is typically done with metals like aluminum, adhesives used for bonding plastics can also be tested for their lap shear strength. Since plastics are widely used across the aerospace, electronics, medical, oil & gas and other Industries, testing plastic substrates can be very useful as well.

Master bond tested many different adhesives and plastic substrates over the years. Most recently, we selected a few plastics and tested the following formulations:

Master Bond engineers tested these epoxies by applying them on a variety of prepared plastic substrates and curing them in lap style joints. It is important to note that these plastics were prepared prior to testing. As mentioned above, the most effective methods for preparing plastic substrates are degreasing, abrasion, physical methods, and chemical treatments. Proper surface preparation plays a pivotal role in achieving high bond strength.

The substrates were then pulled in opposite directions (in shear), until the joints were separated. In some cases, the substrate failed before the bond. This indicated that the maximum possible strength was achieved, and that the surface preparation procedures as well as the curing processes were properly followed.

The plastics used in this testing include:

Regarding the plastics used, we observed that fiber reinforced plastic was the substrate with which epoxies exhibited the highest psi across the board. As for Master Bond formulations, EP29LPSP seems to have outperformed the others in many cases, especially yielding the highest strength values for acrylic, PEEK and Ultem. These findings may be observed from data in the chart below: