Electrical charge can build quickly on surfaces of spacecraft because excited electrons created by thermal sources are less likely to move through insulating materials at the low temperatures of space. As a result, electrostatic discharge (ESD) can occur from the many separate insulated areas of a spacecraft. Indeed, this phenomenon is both so prevalent and powerful that ESD is often the leading factor in electrical and mechanical failures in spacecraft. For this reason, the ability to study ESD under controlled conditions in a simulated space environment is vital for spacecraft operations and crew safety

To enable studies of ESD and other effects, a research team developed a test chamber capable of reproducing different combinations of pressure, temperature, and radiation encountered in spacecraft operations. Within the test chamber, a helium cryostat chamber enables researchers to study the effects of electrons, ions, and photons on different material samples at conditions reaching below 40 K (the temperature of a passively cooled spacecraft in orbit) and five milliPascals (well below the ~30 mPa of pressure found at 100 km altitude – the boundary that formally defines the edge of space). After the cryostat chamber has reached the desired pressure and temperature, scientists can focus a beam of electrons on a material specimen to study the effects of different levels of energy density and flux. Besides using the built-in Faraday cup to measure beam current in real time, scientists can monitor the effects on the samples at wavelengths ranging from 250 nm to 5500 nm with a variety of cameras and spectrometers. 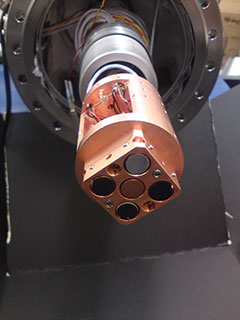 Just as important, scientists can study a variety of material samples without repeatedly recycling the chamber between simulated space conditions and normal atmosphere. Here, researchers can mount different materials on 10 mm copper cylinders designed to be placed in one of four available slots on a rotating holder (Figure). Rather than cycle the chamber to study a different specimen, researchers simply rotate the desired specimen into position within the chamber. To work successfully, this approach depends on the strength and reliability of a thin layer of bonding material that holds each sample to a copper cylinder. For each multi-specimen study to succeed, the bonding agent must maintain a stable, conductive bond between the specimen and copper cylinder despite stresses due to holder rotation, wide excursions in test chamber temperature and pressure, and high electric fields generated during different test scenarios.

In a series of studies designed to verify performance of the test chamber, researchers placed bonded specimen mounts in the rotating holder and reduced pressure. After chamber pressure reached about 5 mPa, the research team first examined arcing due to electron flux at low temperatures. For this stage, the team decreased temperature in the chamber to about 40 K over a four-hour period. In the next stage, the research team studied the effects at elevated temperature by raising chamber temperature to above 450 K over a four-hour period. At each stage of the experimental sequence, Master Bond EP21TDCS-LO epoxy maintained the mechanical and electrical integrity of the specimen mounting bonds.

To study the effects of electrostatic discharge (ESD) on spacecraft, researchers required a bonding agent capable of maintaining bond strength and reliability in a test environment designed to reproduce the low temperature and pressure of space. Using Master Bond EP21TDCS-LO epoxy, researchers were able to bond diverse material specimens in a mechanism that enabled study of different materials without the need to recycle the test chamber between specimens. Despite extremes of temperature and pressure used in the chamber, Master Bond EP21TDCS-LO epoxy ensured the specimen bond stability required to take full advantage of the experimental capabilities of a sophisticated space environment testing system.