In an application documented by Phoenix Scientific Inc. to verify the accuracy of a vehicle scanner, manufacturers employ a reference surface.1 It is imperative that the reference surface accurately represent the test pavement by having uniform scattering, reflectance, and absorption. Maintaining tight tolerances is critical to ensure the flatness of the beam surface as these properties enable the reference surface to calibrate the laser. To do this by machining or lap grinding the surface is very difficult and costly. Additionally, maintaining the flatness of the beam with relocating it to a testing facility is also problematic. The solution was to apply a self leveling epoxy that would harden the beam to a flat surface. For accuracy and cost effectiveness, Phoenix Scientific Inc. (PSI) ultimately selected the desired approach to create this surface, the prepared beam method.

PSI initially considered a water trough calibration. This PVC rain gutter with mylar was ultimately ruled out because it was not practical to verify the flatness by an independent means such as dipstick. A rigid beam was also considered but the stability was affected by windy and bumpy conditions, as well as wetness and dirt on the mylar surface.

PSI opted for a prepared beam approach, which allowed the manufacture of a reference surface to be flat over the full scan length of 14 feet. PSI conducted a structural analysis to define a support strategy that would minimize deflection. The study predicted a deflection of less than 0.001” over a 20°C temperature range. Flatness, equally as crucial as deflection, was a more complicated problem. Machining or lap grinding the surface could achieve the tolerance target, but the size of the beam and risk in affecting flatness during transport to a machining house hindered the practicality of that option. PSI elected to apply a self-leveling epoxy to manage the flatness portion of the tolerance passively.

Some of the concerns in choosing a self leveling epoxy were that the flatness of the beam had to be maintained. Any distortions arising from changes in the weight loading had to be minimized. It was crucial to choose a low exotherm epoxy that could be applied in a specific thickness in large quantities. Application would occur in a low humidity environment over a multiple day period, and had to cure to a hard, smooth finish. Furthermore, the epoxy had to withstand extreme temperatures, specifically high heat conditions without being compromised A 15’ L x 4” W x 8” H aluminum 6061-T6 I-beam, covered with Master Bond self-leveling EP29LP epoxy was chosen. 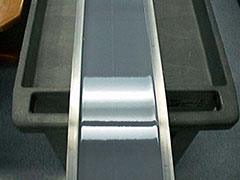 Master Bond EP29LP proved to be the best reference surface when considering stability over time, robustness, and cost. The compound addressed the critical flatness issue. It also exhibits low viscosity and cures slowly, allowing the epoxy to flow to a flat resting state without hardening prematurely. PSI noted that keeping the environment dry is a critical element of a slow curing process, which allows the EP29LP to self-level. The compound was also gently mixed to prevent entrainment bubbles from compromising the homogeneity of the epoxy at the surface.

As predicted by structural analysis, deflection tolerance was found to be less than 0.001” over the 15’ length of the beam over the analyzed temperature range. PSI applied that tolerance threshold, 0.001” max tolerance over the distance, to the flatness dimension as well.

To achieve the deflection tolerance, design engineers supported the beam at two locations as directed by the analysis. This strategy would minimize loading distortions due to the beam’s weight. The nominal flatness of the shaft should be well under 0.1” to assure the success of the self-leveling epoxy. The beam should have a well, or dam, for the epoxy, which must cover the surface to a depth of at least 0.1”.

The most critical property of the epoxy is that it is low-exothermic, to avoid combusting during application. PSI recommends using an epoxy that also has a low-viscosity, to allow the fluid to self-level during the three-day curing process. Curing should take place in a low-humidity environment to produce a smooth surface quality.

The EP29LP epoxy achieved the 0.001” max flatness tolerance success criterion. With sufficient deflection and flatness provided by, respectively, dual beam supports and the self-leveling epoxy application, an 810nm laser scanned down the centerline of the beam, successfully calibrated the scanner with the reference surface. The researchers noted three characteristics of the epoxy necessary for the application: low viscosity, slow cure time, and minimally exothermic. EP29LP exhibits all three, making it the ideal choice.