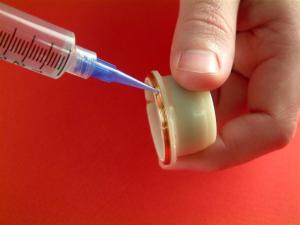 Master Bond EP41SMed is a two component epoxy system that combines swift curing along with impressive chemical resistance, particularly to sterilants used in medical applications. EP41SMed meets USP Class VI and ISO 10993-5 specifications. This lower viscosity system has a 100 to 20 non-critical mix ratio by weight. It sets up quickly after mixing and typically can be removed from a fixture in 40-50 minutes. It cures in 24 hours at 75°F, in 60-90 minutes at 200°F. To obtain optimum properties, curing overnight at 75°F followed by 1-2 hours at 150-200°F is recommended.

As noted above, EP41SMed has sterling chemical resistance. Typically, faster curing epoxies are somewhat less chemically resistant than other types of systems. However, EP41SMed excels at withstanding many chemical steriliants, including ethylene oxide, bleach, glutaraldehyde, hydrogen peroxide based systems and peracetic acid type compounds, among others.

EP41SMed is 100% reactive and does not contain any diluents or solvents. It bonds well to a wide variety of substrates including metals, composites, ceramics and glass along with many plastic and rubber materials. EP41SMed is a highly reliable electrical insulator and is particularly well suited for use in small sized potting applications. Most importantly, it has minimal shrinkage upon curing.

The color of Part A is clear and Part B is amber. The service temperature range is -60°F to +250°F. EP41SMed is highly desirable in medical device manufacturing for both disposable and reusable instruments, particularly when convenient handling, faster curing times and superior chemical resistance are significant.

EP41SMed is available is various sizes and units to accommodate customer's needs.