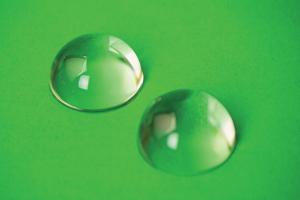 Master Bond MB600 is an aqueous based sodium silicate system for bonding and coating. Most noteworthy is its high temperature resistance—serviceable up to 1,500°F. This one component, low viscosity system bonds well to a wide variety of substrates including, metal, glass, ceramics, composites and many plastics. This system, which is often generically referred to as water glass, can eventually cure at ambient temperatures but heat curing is greatly preferred to optimize properties. A widely used cure schedule is 45 minutes at 200°F followed by another 60 minutes at 300-400°F. Special care should be taken to avoid rapid heating as this may cause the system to “blister”. It is advisable to ramp up temperatures over a 15-30 minute span. It is colorless, odorless, non-flammable and relatively non-toxic. After curing, it retains its optical clarity and has very special light transmission properties, particularly in the range of 200-350 nm.

One aspect of MB600 is that the degree of curing can be utilized in an unusual manner. If it is 70-90% “fully cured” it still contains water, but will have attained most of its strength and temperature resistance properties. The adhesive can then actually be removed at this juncture if it is exposed to boiling water for a number of hours. If and when it is more fully cured, it will totally resist the boiling water. This confers a removability factor to the system when processed in the manner described above. It also should be noted that MB600 is highly alkaline and can adversely affect or etch certain types of substrates, especially glass. MB600 has sound electrical insulation properties and good dimensional stability. While silicates in general have a huge range of applications, MB600 is a more specialized system in the silicate family and is formulated for use in optical, opto-electronic, aerospace, electronic and specialty types of OEM applications.

MB600 is available is various sizes and units to accommodate customer's needs.