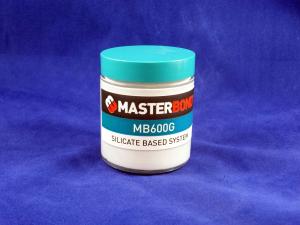 Master Bond MB600G is an aqueous based, sodium silicate system with graphite filler. It is intended for use in applications where moderate shielding effectiveness is required and cost is a more significant consideration. Electromagnetic interference (EMI) and radio frequency interference (RFI) are very important factors in electronic applications. The energy emitted from various sources such as radios, appliances, etc. can interfere with other electronic devices that are made from plastics. Conductive coatings are often applied to the housings in order to protect the devices from these types of interferences.

Shielding effectiveness is most often measured by attenuation. It is defined as the difference of an incoming intensity of the source and its decrease after it passes through the coating. The actual unit of measurement is in decibels (dB). It should be noted that this scale is logarithmic and a difference of 10 dBs indicates ten times the shielding effectiveness (e.g. 40 dBs is ten times as effective as 30 dBs). In general, an effectiveness of 10-30 dBs is somewhat lower in the scale, but is considered to be highly functional in many situations. In order to achieve higher ratings such as 100 dBs, it is necessary to use silver based fillers. This greatly increases the cost. Graphite filled materials are widely used for shielding and static dissipation applications because of the balance of shielding effectiveness and cost.

MB600G was tested with aluminum as the reference material based on test method IEEE 299, 2006. The results are shown below in Figure 1. The frequency shown extends from 1-18 gigahertz (GHz). Unlike other shielding systems MB600G shows remarkably little variation throughout the frequencies shown in the graph. At 1 GHz, it is 40 dBs, and at 18 GHz it is 45 dBs with the highest reading of 50 at 1.2 GHz and the lowest at 27 dBs at 1.8 GHz. Once it reaches 2 GHz, it is superbly consistent, measuring about 40 dBs up until about 15 GHz whereupon it increases slightly to about 44 dBs. The service temperature range is especially noteworthy, ranging from 0°F to +700°F. The combination of shielding effectiveness and temperature resistance is outstanding.

Aside from its excellent performance profile, the handling is simple and safe. It is easy to brush on, and being water based, the system is relatively non-toxic. It should be noted that it is possible to spray this system as well, with the proper equipment. If sprayed on, the shielding effectiveness would be even greater than the values given above. MB600G will cure at room temperature in 24-48 hours or in 1-2 hours at 80°C. If curing with heat, it is advisable to ramp up the temperature over a 15-30 minute interval to prevent any possible blistering of the material. MB600G can be used in a wide variety of aerospace, electronic and electrical applications where a combination of quality shielding and cost effectiveness are important requirements.

MB600G is available is various sizes and units to accommodate customer's needs.