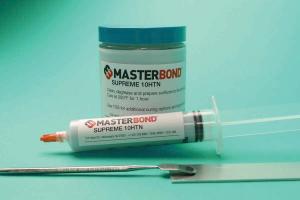 Master Bond Supreme 10HTN-NV is a user friendly, one component, nickel conductive epoxy system with an attractive combination of properties both before and after cure. Supreme 10HTN-NV requires no mixing. It is a true one component system and is not premixed and frozen. The system requires a minimum elevated temperature cure of 250°F. Cure schedules appear in the chart below. It has a paste consistency with very slight flow upon curing. The working life is unlimited and the viscosity does not change with time.

Upon curing, the most salient product property is electrical conductivity. It is a cost effective nickel filled system. Supreme 10HTN-NV is used primarily for static dissipation and EMI/RFI shielding.

In addition to being electrically conductive, Supreme 10HTN-NV has exceptionally good physical strength properties. It bonds well to a wide variety of substrates including metals, composites, ceramics and many plastics. It is strong in both shear and peel modes. Supreme 10HTNNV has high compressive strength and modulus, which translates into stellar dimensional stability. Also, it is a toughened system that can withstand rigorous thermal cycling, vibration and shock. Supreme 10HTN-NV has reasonably good resistance to water, oils, fuels as well as acids and bases. The service temperature range is 4K to 400°F.

Supreme 10HTN-NV is available is various sizes and units to accommodate customer's needs.