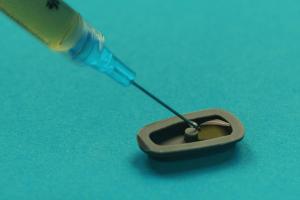 Master Bond Supreme 112 is an exceptionally low viscosity epoxy system for bonding, sealing, potting and impregnation. The mix ratio is 100:70 by weight. Supreme 112 has a very long open time of 5-7 days. As mentioned above it does require oven curing. A typical cure schedule would be 1-2 hours at 200-210°F followed by 3-4 hours at 250°F and then 4-6 hours at 300°F. Post curing at 350°F will further enhance product properties. Supreme 112 combines a high glass transition temperature and a modicum of toughness, imparting a slightly less rigid type system.

Supreme 112 bonds to a wide variety of substrates including metals, composites, glass, and many rubbers and plastics. It adheres especially well to glass, fibers and ceramics. Its service temperature range is -80°F to +550°F.
Supreme 112 can withstand thermal cycling and mechanical stresses. Its physical strength profile is strong and sturdy, particularly its tensile strength. It has good resistance to chemicals including water, oils, fuels, acids and bases. These properties allow Supreme 112 to be used for potting and encapsulation applications, as well as for impregnations. It is especially useful as it pertains to epoxy, composites and other fiber reinforced structures commonly used in pipes, storage tanks, aircraft as well as electronic devices. Since it retains its electrical insulation profile even in harsh conditions, Supreme 112 can be used in numerous electrical applications. These include transformers, switchgear components, resistors and many other electrical devices. Despite the long curing schedule, the properties of Supreme 112 have many advantages when compared to other epoxy systems.

Supreme 112 is available is various sizes and units to accommodate customer's needs.