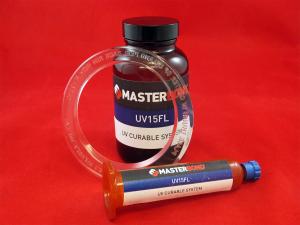 Master Bond UV15FL is a high strength, low viscosity, epoxy based UV curable system for bonding, sealing and coating with augmented toughness. As an epoxy based system, it has a cationic curing mechanism and is completely free of any oxygen inhibition. It is 100% reactive and does not contain any solvents or other volatiles. UV15FL will cure quickly and easily when exposed to a UV light source with a wavelength range between 320-365 nm, with the optimum at 365 nm. The energy required is typically 20-40 milliwatts per cm². The rate of cure depends upon the distance of the light from the material being cured, the thickness of the section and the intensity of the light source. It typically cures in thicknesses of a few microns to 0.015-0.020 inches in 15-30 seconds or less. Epoxy based UVs are described as having a cationic curing reaction. This kind of system will have lower shrinkage (1-2%) and higher temperature resistance than the majority of UV systems, which cure by a free radical mechanism. As mentioned above, UV15FL distinguishes itself with enhanced toughness, which allows for superior impact resistance as well as robust thermal cycling capabilities. It has superb resistance to a wide variety of chemicals including water, acids, bases, fuels and many solvents. It features fine physical strength characteristics and electrical insulation properties. UV15FL has high caliber adhesion to a wide variety of substrates including plastics, glass and many metals. The formulation has impressive optical clarity and light transmission properties. It is important to note that UV15FL’s low viscosity allows it to be spin coated.

Cationic systems, such as UV15FL, tend to have much higher temperature resistance than other UV type systems. Its glass transition temperature (Tg) with a straight UV cure is 80-85°C, and when post cured for 30 minutes at 125°C, the Tg is 115-120°C. This post cure also enhances UV15FL’s chemical resistance. The service temperature range for this system is -80°F to +350°F. It is widely used for a variety of applications in the optical, optoelectronic, aerospace and related industries.

UV15FL is available is various sizes and units to accommodate customer's needs.