What Is an Epoxy Adhesive?

When considering the effectiveness of an epoxy adhesive, it is useful to analyze the general formulation of the compounds that constitute it. Epoxies are created by polymerizing a mixture of two starting compounds, the resin and the hardener. When resin is mixed with a specified catalyst, curing is initiated. Curing is the process by which molecular chains react at chemically active sites, resulting in an exothermic reaction. Covalent bonds between the epoxide groups of the resin and the amine groups of the hardener (catalyst) that arise from this combination afford for the cross-linkage of the polymer, and thereby dictate the rigidity and strength of the epoxy. 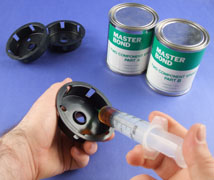 Monitoring curing conditions by temperature and choice of resin and hardener compounds allows alteration of mechanical strength properties and thermal, electrical and chemical resistance. Epoxy adhesives have therefore been developed to suit a huge array of different applications and operating conditions.

Epoxy adhesives adhere to a wide variety of materials, and their properties are dependent upon the specific chemistry of the system and the nature of the cross-linking available. Some of the most important performance requirements include exceptional chemical and heat resistance, excellent adhesion and water resistance as well as satisfactory mechanical and electrical insulating properties. 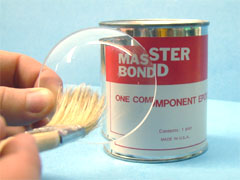 As the most widely used structural type adhesive, epoxy adhesives are commonly offered as either one component or two component systems. One component epoxy adhesives are generally cured at temperatures between 250-300°F, conditions that engineer a product of high strength, excellent adhesion to metals, and outstanding environmental and harsh chemical resistance. In fact, this product is often used as an alternative to welding and rivets.

One component systems are formulated pre-catalyzed and require only moderate heat to cure, improving efficiency and avoiding error that may result from air entrapment. Furthermore, the speed of cure is rapid—faster than two component systems.