Many Master Bond epoxy systems are formulated with superior acid resistance. We continually test our materials by exposing them to specific chemicals over a long period of time. A common way of testing the chemical compatibility of an epoxy is immersing a sample in a chemical and measuring its change in weight over time. A significant loss or gain in weight would indicate a decreased ability of a material to stand up to chemical exposure. These tests allow us to more accurately recommend the right product based on specific application requirements.

In this experiment, we focused on testing our epoxies for their resistance to hydrochloric acid. The compounds Master Bond used for testing are a variety of two component and one component epoxies, and one component UV curing systems with good overall chemical resistance. For the first round of testing, which involved exposure to 15% hydrochloric acid, the products tested were UV25, EP41S-5, EP62-1HT, EP21ARHT, EP17HT, EP125, and EP62-1BF. For the second round of testing, which involved exposure to 25% hydrochloric acid, the same products were tested. For both tests, these products were compared against the resistance of a generic or standard non-chemically resistant epoxy. A few thin castings were made for each product and cured in accordance to their specifications. Once the cured samples were created and initial weight was recorded, the castings were immersed in either 15% or 25% hydrochloric acid. Then, we continued recording frequent weight measurements. Below you will see the results of soaking for more than one year in each concentration. The castings were weighed periodically and the graphs shown below demonstrate the percentage of weight change over time. 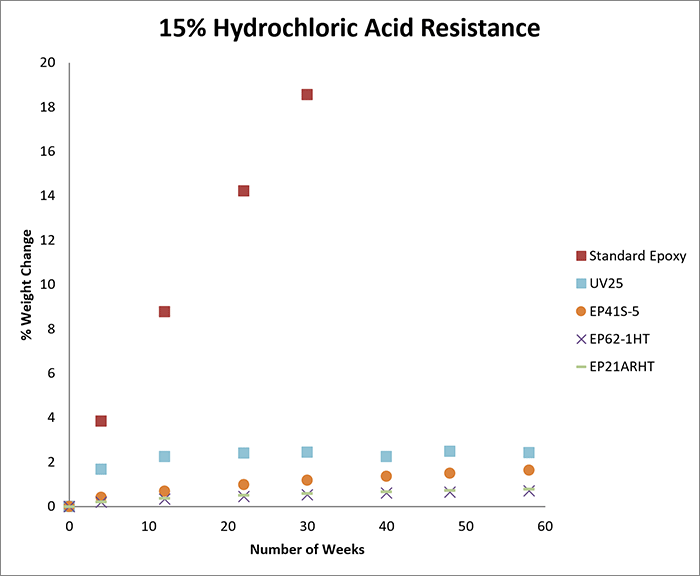 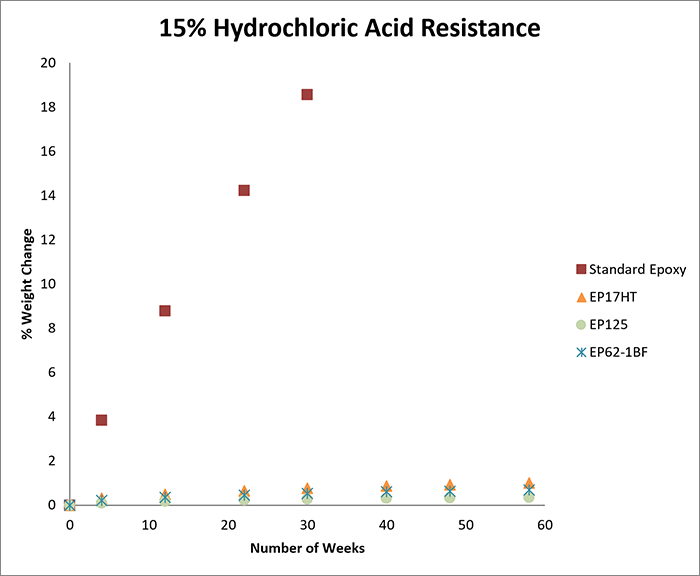 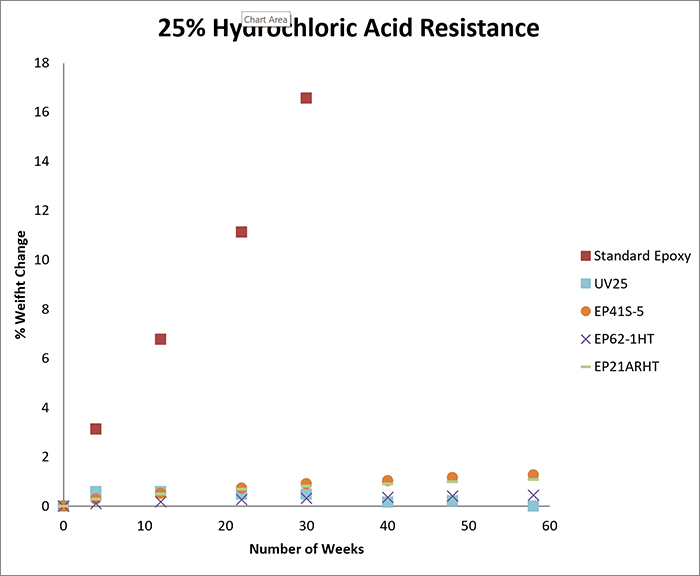 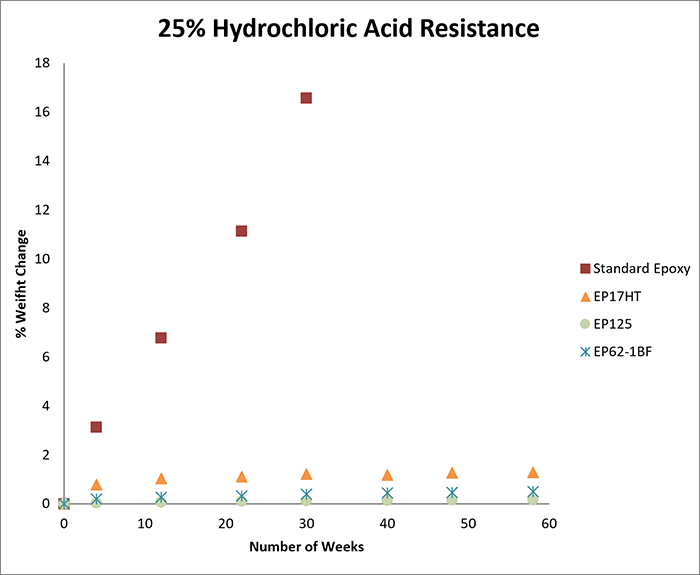 For the purpose of comparison, please notice that for each concentration, a casting of a standard epoxy was also tested under these same conditions which served as a reference. As can be seen in the graphs, the standard epoxy was markedly less resistant to hydrochloric acid than the other epoxies tested. It demonstrated a significantly greater change in weight over time, and at both 15% and 25% concentration levels, the casting ultimately dissolved in hydrochloric acid after approximately seven months.

Acids can etch the surface of an epoxy (resulting in loss of weight) or they can cause swelling of the sample (resulting in weight gain). In general, a weight change of less than 4-5% (gain or loss) can be considered excellent, especially since these tests may be more rigorous compared to actual service conditions. It is also worth noting that in the context of a bonded joint or a potted assembly the exposure to hydrochloric acid might not be as severe or direct as in the above test conditions.

Please note, when choosing an epoxy for an application where the resistance to hydrochloric acid is critical, many other factors must be considered in addition to the chemical resistance. Depending on the concentration level of hydrochloric acid, each of the epoxies in the charts above offers a distinct set of performance properties. For example, at both 15% and 25% concentrations, if electrical insulation and low outgassing are needed, EP41S-5 may be a good option. If a moderate viscosity and long working life are needed, EP62-1HT can be considered. If a one part system is needed at either concentration, EP17HT is an excellent candidate. These products all need to be processed or cured differently but the key in all cases is the addition of heat for enhancing/optimizing chemical resistance especially to hydrochloric acid.